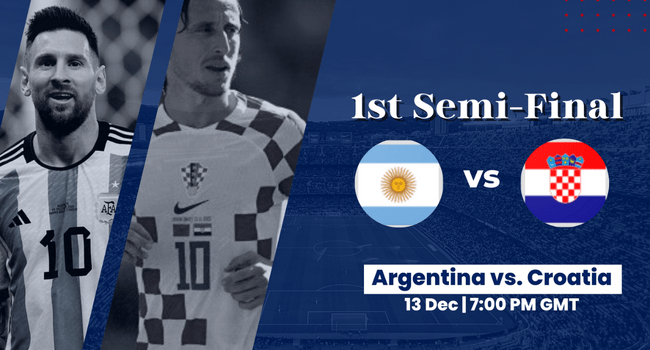 Prediction, squad information, and starting lineups for Arg vs Cro

When Croatia and Argentina square off in Tuesday’s FIFA World Cup semifinal at Lusail Iconic Stadium, they will be looking to go to back-to-back finals after sending one South American powerhouse home from the tournament.

Argentina’s quarterfinal matchup with the Netherlands was a perfect example of how chaotic, competitive, and unpredictable the 2022 FIFA World Cup will be.

Through Nahuel Molina and the cool penalty of the seven-time Ballon d’Or winner, a Lionel Messi-inspired Albiceleste appeared to be headed for the semi-finals. However, a late brace from Wout Weghorst, including an equalizer in the 100th minute, caused the most unlikely of extra time.

The outcome of the match would be decided by yet another penalty shootout, and despite several fights, roughhousing, and an astounding 17 yellow cards, Argentina maintained composure to win and move on to the semifinals.

Although Lionel Scaloni’s crop will not have an all-South American semifinal between Brazil and Argentina, the Copa America winners’ history in World Cup semifinals provides for some pretty interesting reading.

Argentina has never lost in the FIFA World Cup’s last four and has advanced to the championship game each time they have reached this stage. Their most recent appearance in this stage was in the 2014 tournament, just before their painful loss to Germany.

Despite scoring in each of their past 14 games, Scaloni’s brave goal scorers approached the semi-finals having made the net ripple twice in each of their last four games across all competitions.

Dominik Livakovic of Croatia will undoubtedly be questioned about the placement of his statue upon his return to his own country because he often stopped Brazil before the Checkered Ones’ fondness for penalties became apparent.

Neymar scored a beautiful goal to give Brazil the lead in the 106th minute while Croatia’s defense was famously tough to penetrate. However, Bruno Petkovic’s effort in the 117th minute made its way into the corner through a deflection to force a 12-yard battle of nerves.

The Selecao dream was crushed when Marquinhos’s shot crashed against the post, allowing delirium to take over for those in red and white as they celebrated a second consecutive World Cup semi-final. Livakovic kept Brazil out 11 times before also saving from Rodrygo in the shootout.

The Checkered Ones, who are now unbeaten in 11 games heading into their encounter against Argentina, are on the verge of repeating history after Dalic’s team somehow advanced to the 2018 World Cup final without winning any of their knockout games in regular time.

Only Italy, the Netherlands, and Germany have ever reached back-to-back finals, thus Croatia would join an elite group if they can advance to the championship match.

A memorable 3-0 victory over Argentina was achieved by the Checkered Ones in Russia four years ago, and several members of that team are still present to try to make lightning strikes twice in Lusail. Argentina and Croatia have previously faced each other twice in the World Cup group stage, with La Albiceleste winning both times by a score of 1-0 in 1998.

Mateu Lahoz, a card-happy referee, won’t be making friends with the Argentina and Netherlands teams any time soon, especially since two of his 17 cards were given to full-backs for the Albiceleste, Gonzalo Montiel and Marcos Acuna, who are now suspended for the semi-final after receiving two of them each.

Fortunately, Scaloni did not see any players suffer injuries during the 120-minute quarterfinal. Montiel was unlikely to push Molina for the right-back position, while Acuna will hand left-back duties over to Nicolas Tagliafico as he sits on the naughty step.

Alejandro Gomez is accelerating his rehabilitation from an ankle strain in an effort to be available, and Rodrigo De Paul and Angel Di Maria, who have both been dealing with personal issues, anticipate starting the semi-final healthy.

Scaloni chose to match the Netherlands’ defense with a five-man backline, bringing Lisandro Martinez back from the sidelines. However, if Scaloni switched to a four-man defense, Martinez could now have to make way for the fit-again Di Maria.

With regard to Croatia, Dalic was fortunate to have a totally healthy team for the quarterfinal victory against Brazil, and now that Borna Sosa and Mislav Orsic have both recovered from their individual illnesses, he should be able to train with all of his players on Tuesday.

Dalic introduced Mario Pasalic from the opening whistle against Brazil despite his team’s well-documented goal-scoring woes, and the Atalanta BC player may be confident in keeping his spot on the right wing.

After Petkovic’s thrilling equalizer in the quarterfinals, Andrej Kramaric might be worried about keeping his spot at the front of the attack, but the Hoffenheim player has started every game in Qatar thus far and will probably keep it from the get-go.