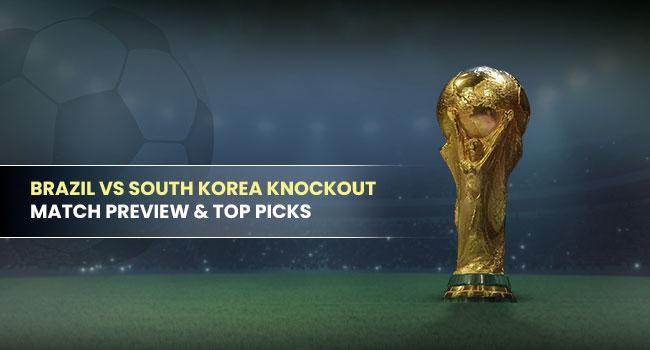 Brazil vs South Korea Round of 16 Match Preview

In their last Group G match against Cameroon, a much-changed Brazil team had several opportunities to score, but Devis Epassy’s outstanding goalkeeping and the carelessness of Tite’s peripheral players prevented that from happening.

The Indomitable Lions held out for 92 minutes before Vincent Aboubakar gave them a famous victory. Aboubakar was dismissed for a shirt-stripping celebration after already receiving a booking, but the 1-0 scoreline didn’t matter as Cameroon packed their bags and left, while Brazil narrowly defeated Switzerland to win the group.

Brazil’s nine-game winning streak has suddenly come to an end, despite the fact that they are still one of the favorites to win the World Cup of Giant Killings. Even their narrow victories over Serbia and Switzerland lacked the aggressive ruthlessness that had been anticipated of them.

The five-time winners have a history of sluggish beginnings, and they have gone five World Cup games without scoring in the first half. If they want to maintain their status as favorites for a little bit longer, they will need to fix this.

However, the Selecao has now advanced to the World Cup knockout round for nine consecutive tournaments, and it has been 32 years since Brazil was last eliminated in the round of 16 by Argentina, losing 1-0 thanks to a goal from Claudio Caniggia.

After the events of Friday afternoon, an unprecedented all-Asian quarterfinal at the World Cup is now a distinct possibility. South Korea overcame Portugal’s early goal by Ricardo Horta to shock the 2016 European Champions and proceed to the knockout rounds.

Before the halftime break, Kim Young-Gwon took advantage of Portugal’s mistake to clear their lines from a corner to tie the game at one goal each. With 91 minutes remaining, Wolverhampton Wanderers’ Hwang Hee-chan perfectly timed his move to score the game’s third and decisive goal.

After the final whistle, players congregated to witness the result of Uruguay’s match against Ghana. A 2-0 victory for the South American nation was not enough to quell the celebrations, as those wearing red and white exploded as their team’s spot in the round of 16 was assured due to goals scored.

Despite being significantly altered, neither Uruguay nor Portugal were able to defeat South Korea, who may play Japan in the quarterfinals. However, their other Asian opponents, Croatia, face a similarly difficult last-16 matchup on Monday.

The Tigers of Asia have only ever advanced past the round of 16 in a World Cup once, reaching the semi-finals of the 2002 tournament amidst a wave of officiating controversy. They most recently faced Brazil in a friendly match in June, although that contest ended in a resounding 5-1 loss.

Despite the busyness of the Brazil team’s treatment room during their brief stay in Qatar, Selecao physician Rodrigo Lasmar gave a favorable report on Neymar, who still has a chance to heal from an ankle injury in time to start against South Korea.

Although the former was always anticipated withdrawing for Richarlison here, Tite has now lost both Gabriel Jesus and Alex Telles for the duration of the competition due to knee injuries they both suffered in the match with Cameroon.

Due to the absence of Telles and Alex Sandro’s hip issue, Tite is lacking a left-back, although Danilo is recovering well from an ankle strain of his own and might fill in, with Eder Militao holding the position.

Lee Jae-sung may now be concerned about his position in the starting XI because South Korea’s Hwang had hamstring issues throughout the tournament before scoring the goal that would advance his country.

Both men are believed to be healthy and expected to play on Monday when star Son Heung-min will aim to improve on his pitiful goal total of one from his previous 13 World Cup attempts.

With goal threats spread throughout the whole field, South Korea may be confident that they can exploit a depleted Brazilian defense. Son and Hwang will undoubtedly be licking their lips after learning about Selecao’s full-back injury problems.

We anticipate Selecao’s abundant attacking options to propel the five-time winners into the final eight and put an end to South Korea’s dream despite Brazil’s setback to Cameroon. Tite will now welcome back a multitude of first-team talents and may even have Neymar available from the start.