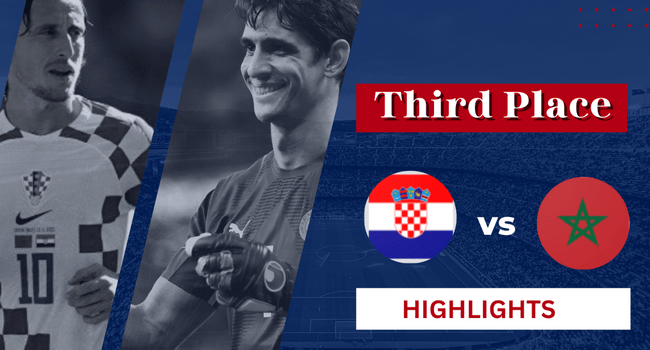 A World Cup 2022 bronze medal is on the line between Croatia and Morocco in Saturday’s third-placed playoff at the Khalifa International Stadium, and neither side should turn their noses up to a podium finish on the grandest stage.

Zlatko Dalic’s side was comfortably seen off 3-0 by Argentina in their semi-final, while the Atlas Lions fought valiantly against France but were put to the sword by two goals to nil.

Few attackers have faced the masked warrior that is Josko Gvardiol and beaten the RB Leipzig youth, but even one of Europe’s most in-demand defenders was no match for a 35-year-old Lionel Messi.

Prior to his outright humiliation of a guy 15 years his junior, Messi smashed home the opening goal in Argentina’s semi-final versus Croatia from the penalty spot before Julian Alvarez’s solo run delivered La Albiceleste their second, although with some slices of good fortune after a number of ricochets.

Argentina’s third was everything but fortunate, as Messi rolled back the years on the right side before picking up Alvarez to tap home Argentina’s third and deny Croatia a second consecutive appearance.

Dalic’s team made the 2018 World Cup final and the 2022 semi-finals without winning a knockout game in regular time, and they are no strangers to bronze medal contests, having defeated the Netherlands 2-1 in the 1998 third-place playoff during their debut World Cup campaign.

Croatia, a team that has consistently demonstrated its prowess in extra time and penalty shootouts, will not be relieved to learn that the third-place playoff has never been decided on spot kicks, and the uninhibited Morocco fanbase will no doubt continue to bang their drums to the maximum for one last ride.

Morocco, the first African nation to reach a World Cup semi-final, might have become the continent’s first side to make it all the way to the final had it not been for a lack of killing instinct in the final third.

Regragui’s team had not surrendered to an opponent player in Qatar until to Hernandez’s breach with only five minutes on the clock on Wednesday, but they may still become the first country since Spain’s successful team of 2010 to maintain five clean sheets in a single World Cup.

CRO vs MOR renew hostilities just a few weeks after their goalless draw in Group F, in which the Checkered Ones were limited to only five attempts against Regragui’s backline, and a similarly tenacious defensive performance could set the Africans on their way to a historic World Cup victory.

Croatia’s semi-final loss to Argentina was made worse by injury, as midfield fulcrum Marcelo Brozovic was forced to quit in the 50th minute owing to pain and is now a significant question for the third-place playoff.

Guardiola, 20, required injections to play despite the discomfort of a foot ailment in midweek, and Dalic has stated that he would not risk any player who is not 100% healthy, so Lovro Majer and Kristijan Jakic should be on standby to cover for Brozovic in the center if necessary.

Josip Sutalo, another highly rated center-back, may replace Gvardiol, while Ivan Perisic could keep his spot on the left as he attempts to become Croatia’s all-time leading World Cup goalscorer, with the Tottenham Hotspur star presently tied with Davor Suker on six.

Regragui remarkably recovered all of Aguero, Mazraoui, and Saiss for Morocco’s semi-final, but the wounded triad pulled out one by one – in Aguerd’s case shortly before the first whistle.

Saiss was also taken off after 20 minutes after being outpaced by Olivier Giroud, while Mazraoui was taken off at the half-time interval, leaving Regragui back where he started in terms of injury, but the severity of their issues is presently unknown.

It’s tough to see Regragui risking either member of the trio for Saturday’s game, so a return to a 4-3-3 formation may be in order as Yahia Attiyat Allah and Selim Amallah try to push their way back into the starting lineup.

A trident of injured defenders would not bode well for any team, but Morocco’s backline stand-ins have put in impressive performances and are now facing a Croatia XI that is not known for its offensive prowess.

Rearguards will most certainly win this bronze medal match, but Regragui’s team simply has to improve their final ball to make their moments of pressure count, and we believe the Atlas Lions can do exactly that and cap a spectacular World Cup adventure on a podium.

Join in on the World Cup action and get ready to win great cryptocurrency prizes on the top fantasy sports app for cryptocurrency, Fanspel. It often organizes contests that are interesting and lets you earn passively while following your favorite teams.