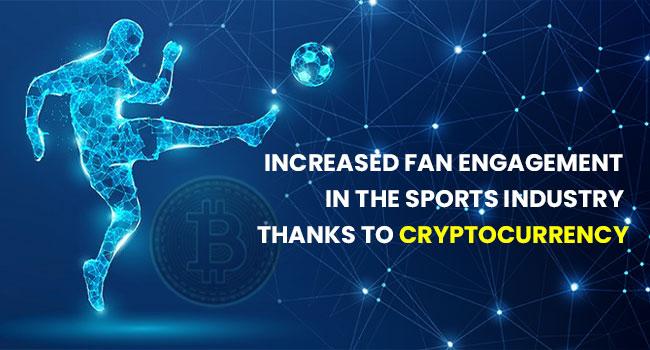 What was previously unthinkable has become the hottest trend in the modernistic sports ecosystem. Cryptocurrency, blockchain, and non-fungible tokens (NFTs) are taking the sports world by storm.

These technologies are monetizing and enhancing fan engagement and sponsorships in ways that were only a dream a few decades ago.

In order to acquire legitimate ownership of distinctive digital images, videos, and other content of their preferred sports star or team, fans are spending millions of dollars. In fact, according to BBC News Reports, $350 million had been invested in virtual goods in the form of football club crypto tokens as of 2021, demonstrating how digital goods are dominating the world thanks to their distinctive value proposition.

According to another study, 47 percent of sports fans are aware of the growing role of cryptocurrencies in sports, such as Bitcoin and Ethereum, and at least 27 percent own some. As a result of this trend, cryptocurrency has risen to become the fastest-growing sponsorship category in sports over the last two to three years.

The sudden increase in cryptocurrency participation in sports

The use of cryptocurrency in sports had already begun a few years ago, but the pandemic imposed restrictions that simply accelerated its spread.

Long-term lockdown restrictions, a ban on stadium admission, social distance norms, and the impending threat of a new COVID-19 variant forced the leaders of the sports industry to develop improved fan engagement strategies.

The fundamental idea behind this advancement was to keep fans connected and satisfied while adhering to social distancing and other precautionary rules. This paved the way for the implementation of blockchain technology, digital currency standards, crypto-sponsorship, and NFTs, which completely transformed the traditional aspects of the sports world.

How are cryptocurrency and blockchain changing the sports industry?

Cryptocurrencies such as Bitcoin, Ethereum, XRP, Tether, and many others have been incorporated and accepted as payment methods over the last decade. Fans are also using it to buy tickets and merchandise.

Furthermore, clubs are now paying part or all of their players’ salaries and transfer fees in cryptocurrencies. Lionel Messi, the record seven-time winner of the Ballon d’Or, is the most recent and well-known example of this rapidly evolving phenomenon.

According to reports, Messi received a large portion of his signing fee (£25 million) from Paris Saint-Germain in cryptocurrency.

Harunustaspor, a Turkish football club, is another example. According to media reports, it is the first club to purchase a player using cryptocurrency (Bitcoin).

Omar Faruk Kiroglu received $0.0524 in Bitcoin in 2018 as part of a first-of-its-kind deal with this cryptocurrency-forward football club. The Gibraltar United Football Club paid its players in cryptocurrencies in the same year.

Recently, the NBA franchise Sacramento Kings offered crypto salary options to all of their players in 2021, further strengthening their core pro-crypto model.

The rise of cryptocurrency assets and fan tokens

Most die-hard sports fans are constantly on the lookout for new ways to interact with their favorite sports team in a comprehensive and personalized manner.
The most exciting bridge between sports and fans is the emergence of fan tokens or sports tokens. These exclusive tokens give fans the ability to influence binding and non-binding decisions made by the club or sports teams, as well as vote on team-related matters such as kit design, ground names, and even selecting the right charity initiatives.

It’s similar to having a VIP card at a prestigious club, where you get some perks and premier benefits. The owner can use fan tokens to gain exclusive rewards and express their concerns or opinions about a team’s growth and development.

In contrast to IPOs, owning sports tokens does not provide you with equity shares, but it is still relatively profitable.

FC Barcelona sold fan tokens worth USD 1.3 million in less than two hours in mid-2020. The lucky fans who were able to purchase the token now have the opportunity to voice their opinions and concerns during club surveys throughout the season, as well as the chance to win special prizes in token-owners-only polls.

Additionally, fans can use these tokens to gain VIP access to Camp Nou, FC Barcelona’s home stadium, and meet players in person.

Apart from this, it is a full-fledged cryptocurrency and staking platform, which enables its users to earn passive income via trading and staking.

Check out the staking and trading of the FAN token at fanspel.io.