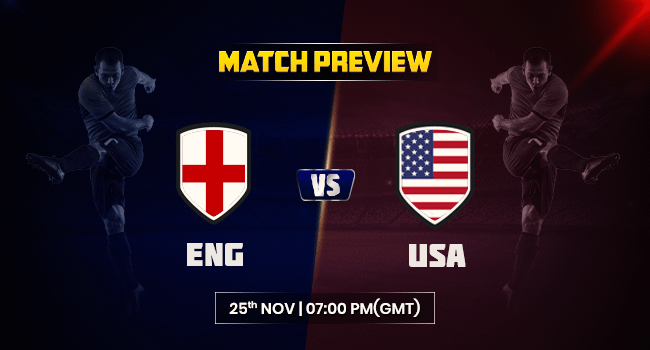 Following a convincing victory in their initial 2022 World Cup match, England will try to increase their chances of taking first place in Group B when they face the USA on Friday night at the Al Bayt Stadium in Al Khor.

On Monday, the Three Lions started their campaign by scoring six against Iran, while the Stars and Stripes were forced to split the victory with Wales in their first match.

A poor winless UEFA Nations League season caused excitement around Gareth Southgate’s team to decline to come to Qatar following great highs of reaching the World Cup semi-finals four years ago and then the final of Euro 2020.

The Three Lions, on the other hand, raced to their biggest-ever win in the opening game of a major event, a 6-2 triumph over Iran, as the nation’s expectations were raised in a decisive manner.

In a commanding first-half performance, Bukayo Saka scored either side of goals from Jude Bellingham and Raheem Sterling. Substitutes Marcus Rashford and Jack Grealish then added goals after the interval.

Southgate was “fired up” after Iran’s Mehdi Taremi scored two consolation goals, despite his team’s effort in a game that had over 30 minutes of stoppage time over the course of the two halves. In fact, the England manager has urged his players to increase their concentration when playing against the USA.

England will take on the United States looking to win their first two World Cup group games for the fourth time, having previously done it in 1982, 2006, and 2018. They earned all three points against Iran. Southgate and co. defeated Panama, who missed out on a spot in Qatar after placing second to the United States in CONCACAF qualification, 6-1 in their second World Cup match.

With a total of 39 goals scored in their eight victories over the United States across all competitions, England will look to make it nine on Friday in an effort to advance to the round of 16.

The USA started their World Cup qualifying campaign in Qatar on Monday with a 1-1 draw against Wales, a game they were dominating until a certain Los Angeles FC player equalized.

Nine minutes before halftime, Timothy Weah gave the Stars and Stripes a deserving lead. However, as Gregg Berhalter’s team lacked energy in the second half, Wales stepped up their game. Wales’ star player, Gareth Bale, earned Wales a crucial equalizer from the penalty spot in the 82nd minute after Walker Zimmerman clumsily tackled the LAFC forward inside the box.

Although Berhalter, 49, who briefly played for Crystal Palace, has already faced criticism in his own country, he feels his squad “left everything out there” and is still optimistic about making it to the knockout stages.

At their last two World Cup tournaments, the USA managed to advance beyond the group stage, finishing second to Portugal in 2014 and first to England in 2010. In fact, the Americans’ dramatic 1-1 tie with the Three Lions in their most recent match—during which Robert Green mishandled a Clint Dempsey goal—aided them in surpassing Fabio Capello’s team on goal differential.

Twelve years have gone since these two countries last faced off on the international scene, and despite the fact that England’s most recent matchup ended in a scoreless draw with the USA, Southgate and company enter Friday’s matchup in good spirits and as heavy favorites to win all three points.

The Three Lions will be certain of triumph in Al Khor and should have little difficulty in scoring a simple victory against their American opponents, despite the fact that there have already been a few unexpected results at this year’s event in Qatar.