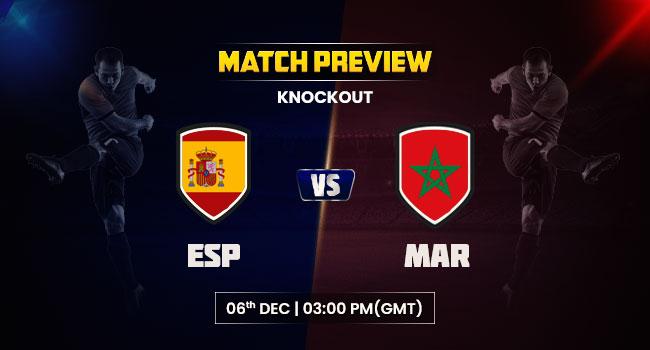 Spain’s devastating defeat to Japan in their last group-stage match may have damaged their confidence. But La Roja is aware that this is the first time since they won the competition in FIFA 2010 that they haven’t been able to make it past the quarterfinals. Morocco, on the other hand, has so far in the FIFA World Cup 2022 played better than expected and won their group. They are participating in the round of 16 for just the second time in history.

Overview of ESP Vs MAR

The winner of Group F, Morocco, will face Group E’s runners-up, Spain. The fact that Spain placed second in their group was stunning. But Japan had a fantastic group stage, winning against Germany and Spain to take first place. But now that Japan’s world cup run has come to an end after losing on penalties to Croatia, Spain would prefer to lead Group E. The North Africans won the group, which also included Belgium, by going unbeaten (two wins and one draw)

Morocco, who has never advanced past the quarterfinals, will be anxious to continue their fantastical 2022 odyssey. Senegal, the only other African team to get to the Round of 16, was destroyed 3-0 by England. The Atlas Lions now want to beat their previous World Cup records. Their finest performance thus far occurred in 1986, when they lost in the Round of 16. The goal of Walid Regragui’s team is also to beat the record for the most straight victories by an African nation in a World Cup. Currently, Cameroon (five times) holds the record, with Morocco coming in second (four).

Given that they would have played Croatia in the round of 16, some people would see Spain finishing in second place as a gift in disguise, but they are fully aware of how difficult this match would be. Luis Enrique is aware that Spain was eliminated from the 2018 FIFA World Cup in the round of 16, though. At this point of the competition, Spain had never been eliminated twice, and their nine goals in the group stage were a joint-highest total with England.

Will Spain perform well at the 2022 FIFA World Cup?

Spain will adhere to its “football mentality.”

Spain will need to significantly improve on their last performance, which saw them lose to Japan.

During the first 45 minutes of the match, La Roja displayed a masterpiece in passing, but in the second half, the team under coach Luis Enrique committed defensive errors that led to two goals being conceded in six minutes. They barely managed to stay in the competition because of a better goal differential than Germany.

The midfielder who became a center-back Rodri stated that his team had concentrated on learning from their mistakes rather than altering their tiki-taka strategy as a result of the defeat.

Out of the three games Spain has played against Morocco, two have finished in victories and one in draws. In those games, Spain scored six goals while also giving up four. The previous match between the two groups took place during the group stages of FIFA 2018 and ended in a 2-2 tie.

Ferran Torres of Spain and Youssef En-Nesyri of Morocco, who has already scored in FIFA 2022, are the two forwards to keep an eye on.

On December 6 at 8:00 PM (Indian time), Morocco vs. Spain game will take place at the Education City Stadium in Ar Rayyan.