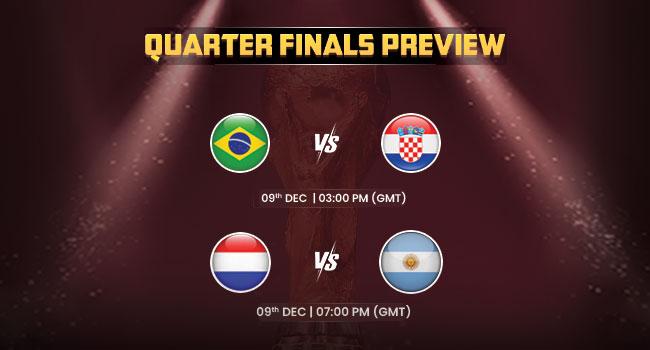 Following an overwhelming victory over South Korea in the round of 16, Brazil will meet Croatia in the quarter-finals on Friday at the Education City Stadium in Al Rayyan. Croatia defeated Japan in a penalty shootout in the previous round, but can the 2018 runners-up overcome the tournament favorites?

Brazil coach Tite has stated that joining his team’s celebrations against South Korea was not intended to be disrespectful to the opposition.

The Selecao defeated South Korea 4-1 on Monday, securing their spot in the World Cup quarterfinals in style.

Vinicius Junior began the scoring before Neymar scored a penalty following a foul on Richarlison, who added a superb third before Lucas Paqueta rounded out Brazil’s tally in the first half.

Tite performed the ‘pigeon’ dance alongside Richarlison after his goal, which finished a great move.

The Paris Saint-Germain forward is also one goal shy of tying Pele’s Brazilian record of 77.

“Achieving marks is a great source of pride,” Neymar said.

“I reached numbers that I would never have imagined reaching, that’s always very good. It makes me very happy.”

Brazil is separated from a spot in the last four by Croatia.

This is Brazil’s first encounter with Croatia since a 2-0 friendly victory in June 2018, during which they have never lost.

Only Germany (12) has advanced further in the World Cup than the South Americans, who are attempting to do so for the ninth time.

Croatia, who finished second in 2018, has advanced to at least the semifinals on both prior occasions they have advanced past the group stages (1998 and 2018).

Croatia finished second in Group F, behind Morocco, but ahead of Belgium and Canada, advancing them to the knockout round in Qatar 2022.

They have several seasoned players, including Luka Modric, Ivan Perisic, Dejan Lovren, and Andrej Kramaric, with Josko Gvardiol emerging as one of the tournament’s rising talents.

Dominik Livakovic, the goalie, saved up to three penalties in a shootout, becoming him the third goalkeeper in World Cup history to accomplish this feat.

The Netherlands and Argentina square off in a tantalizing World Cup 2022 quarterfinal that is sure to include goals on Friday night at the Lusail Iconic Stadium.

The South American champions defeated Australia 2-1 to maintain their chances of winning the tournament while Louis van Gaal’s team defeated the USA 3-1 to secure their place in the round of eight.

Cody Gakpo’s recent scoring streak against the USA may have come to an end, but Van Gaal’s vivacious wing-backs carried the scoring load in Saturday’s last-16 match, as the Americans were penalized for failing to consolidate on a strong start.

While Haji Wright’s unconventional flick gave the USA some hope, Denzel Dumfries delivered identical assists for similar goals for Memphis Depay and Daley Blind in the first half. Blind then turned provider for Dumfries, who volleyed in unopposed to end the game.

When the USA put the Netherlands under pressure in the opening exchanges, Van Gaal did little to support his claims that the Netherlands was not a “boring” side, but the Oranje sure did teach their American counterparts a lesson in ruthlessness to advance to the quarterfinals for the third consecutive match.

In fact, the Netherlands advanced to the semifinals in both 2010 and 2014 before painfully failing to qualify for the Russia World Cup. They have now reached the last eight in four of their previous five World Cup competitions, with the exception of a last-16 elimination in 2006.

The Netherlands’ undefeated record across all competitions now runs at an incredible 19 games, but when two offensive heavyweights go head-to-head for dominance, something has to give. The 2010 runners-up haven’t lost a World Cup quarterfinal game since 1994.

Lionel Messi eventually scored his first non-group stage World Cup goal against Australia, who did not submit a white flag in defeat. The scenario had been set up for Messi to break his knockout hoodoo in his 1,000th career match.

The former Paris Saint-Germain player scored with a low finish, and then, much to the amusement of Kamil Grabara, the goalkeeper’s rival from Copenhagen, Julian Alvarez stole the ball from Mathew Ryan to score Argentina’s second. Craig Goodwin’s deflected goal then gave Australia hope of an unlikely comeback.

Garang Kuol, a youngster headed to Newcastle United, came within milliseconds of doing the impossible for the Socceroos, but Emiliano Martinez made a crucial save to send Argentina ahead.

The last time Argentina advanced past the quarterfinals was in 2014 when they came in second place, but prior to that, they had lost their previous three matches in a row (in 1998, 2006, and 2010). Since the tournament’s inception in 1930, European teams have eliminated Argentina nine times in a row.

As a result, history does not favor Lionel Scaloni’s team, but a 13-game scoring drought across all competitions does. La Albiceleste would be wise to encase Messi in cotton wool as they try to break their losing skid against the Dutch.

Join in on the World Cup action and get ready to win great cryptocurrency prizes on the top fantasy sports app for cryptocurrency, Fanspel. It often organizes contests that are interesting and lets you earn passively while following your favorite teams.