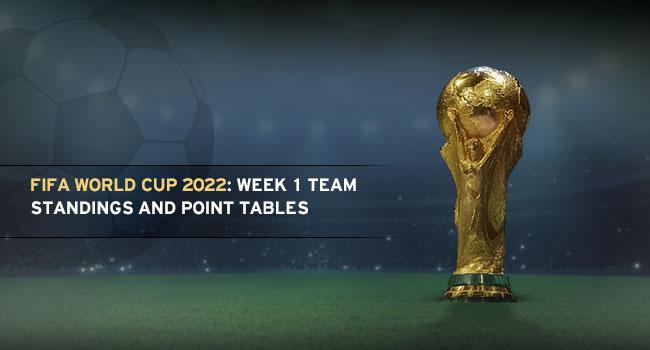 The opening week of the FIFA World Cup 2022 in Qatar saw a lot of drama and action.

While a few dominant teams cemented their dominance with sizable victories, a few others suffered surprising losses at the hands of underdog clubs.

These outcomes had a significant influence on each group’s team standings and points table. The only two teams still competing in this World Cup are the hosts Qatar and Canada, while the only team to have advanced to the knockout rounds in France, the reigning champion. Look at the points table and team rankings from each group to see how each team has performed thus far.

In Group A of the FIFA World Cup 2022, the host nation Qatar, Senegal, the Netherlands, and Ecuador are all participating. The Netherlands and Ecuador are keeping the top slots with four points apiece, while Qatar is out of the competition after dropping two consecutive games.

Moving on to Group B, only England and Iran have at least one victory, while Wales and the USA have yet to score. From this group, none of the teams have advanced to the next phase.

So far in this World Cup, Group C, or more appropriately, a group of death, has captured everyone’s attention. Argentina has been able to stay in the hunt for the knockout rounds after losing their opening encounter against Saudi Arabia and defeating Mexico.

The reigning champions France are currently the only team in Group D to advance without incident, with Tunisia and Denmark staring at the exit with no victories in their first two games. On the other hand, Australia has a win and a loss.

Teams like Spain, Japan, Costa Rica, and Germany are in Group E. In this category, all of the teams have received media attention. Starting with Japan’s victory over Germany and moving on to Spain’s 7-0 thrashing of Iran in the group’s opening match. The group is still open after Sunday night’s 1-1 draw between Germany and Spain.

Teams like Belgium, Morocco, Croatia, and Canada are in Group F. Being the second team to be eliminated from the World Cup thus far, Canada made an impression in Qatar. Croatia, a finalist the year before, has undoubtedly regained their footing after defeating Canada 4-1. Conversely, Belgium was shockingly defeated by Morocco on Sunday, 0–2.

Teams like Brazil, Switzerland, Serbia, and Cameroon are in Group G. Brazil, the five-time champions, looked sharp in their group opener against Serbia, while Switzerland also prevailed against Cameroon.

Portugal, Uruguay, Ghana, and South Korea are the four teams competing in the last group. This group was expected to be intriguing because all four teams may advance to the next round, and thus far, they have lived up to the hype.

Are you Ready with your Team Now? Join on Fanspel Blockchain-based Fantasy Sports App.