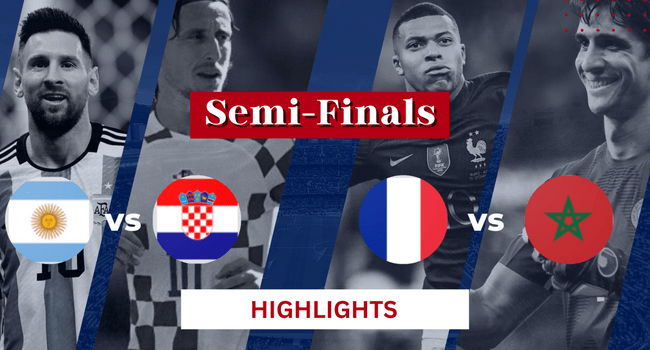 France vs Morocco: Kylian Mbappe-starrer France has upstaged Achraf Hakimi-starrer Morocco 2-0 in the second semi-final of the FIFA World Cup 2022 at the Al Bayt Stadium. France will meet Argentina in the final.

Extending their lead in the second half, substitute Randal Kolo Muani scored the second goal for France as the defending champions ended Morocco’s dream run at the grandest stage. Kylian Mbappe-starred France will meet Lionel Messi-led Argentina in the final of the FIFA World Cup 2022 on Sunday.

Argentina advanced to its first global title since 1986 with a 3-0 victory over Croatia on Tuesday in a World Cup semifinal in Lusail, Qatar. The South American giant defeated the runner-up from the previous year to go to its sixth final, where it will take on either France or Morocco on Sunday. Star Lionel Messi, who most likely is participating in his final World Cup, would consider success to be the ultimate accomplishment. Late in the first half, Messi’s penalty strike gave Argentina the lead against an outclassed Croatia. For game highlights, continue reading.

After winning the global title in 1978 and 1986, Argentina is currently 6-0 in World Cup semifinal matches. With his 11th goal in as many World Cup appearances, Messi surpassed Gabriel Batistuta as Argentina’s all-time leading scorer.

Croatia aimed to reach the FIFA World Cup final for the second time in a row. Top-ranked Brazil and No. 2 Belgium were both defeated by the Croatians in the quarterfinals and group stage, respectively, but they were unable to go past No. 3 Argentina.

Argentina got things going with a stunning first-half penalty shot from Lionel Messi. When Messi participated in his first World Cup game at the age of 6, Julián Alvarez made sure that his renowned countryman would be competing for the World Cup championship that would complete his illustrious career.

Argentina defeated Croatia 3-0 in the World Cup semi-final on Tuesday in Lusail, Qatar, thanks to goals from Messi and Alvarez. Alvarez’s goal came five minutes into the first half after an amazing run spanning three-quarters of the field. For the second time in eight years, Argentina has gone to the World Cup final and will face either France or Morocco on Sunday.

It will be exciting to see what happens in the finals, France will be facing Argentina and will be in a full-throttle mode to win the trophy, even though France can be deemed as the favorites there is no denying how great Argentina has been in this world cup. Along with their form, it is going to be Messi’s last world cup and he will be ecstatic to be in the finals and win it too.