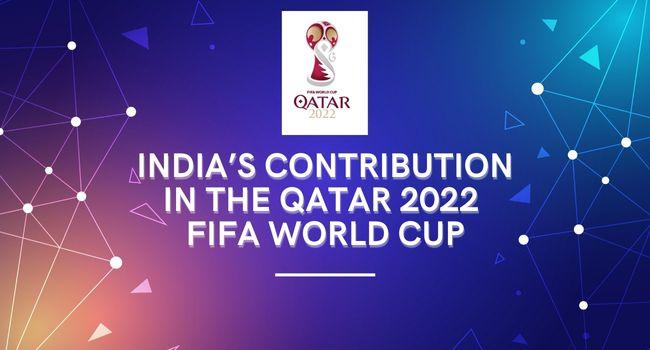 The Indian community’s contribution to the Qatar 2022 FIFA World Cup, which will be the shortest in FIFA history as well as the first to be held in the Middle East and the Arab world, is enormous.

According to aljazeera.com, more than 23,500 of the 1.8 million FIFA World Cup tickets sold in the first two phases of Qatar 2022 were purchased by Indian fans.

India was ranked seventh in ticket sales following the first phase of ticketing.

AIFF-QFA tie-up It’s possible that the All India Football Federation (AIFF) signed a Memorandum of Understanding (MOU) with the Qatar Football Association (QFA) to strengthen football ties between the two countries by chance.

Kalyan Chaubey (President) and Shaji Prabhakaran (Secretary General) of the AIFF met with QFA President Sheikh Hamad bin Khalifa bin Ahmed Al Thani, General Secretary Mansoor Al Ansari, and other Senior Board Members during their recent visit to Doha to discuss a strategic alliance for the mutual benefit of football in both India and Qatar.

In order to discuss the future of Indian football, the newly elected AIFF office holders also spoke with Gianni Infantino, the president of FIFA. At Qatar 2022, India will be visible everywhere. Despite the nation’s failure to earn a spot in the FIFA World Cup, it will be represented at the mega-sporting event by a replica of the Uru, a traditional wooden dhow built in Beypore, Kozhikode, and used in antiquity for trade with Mesopotamia.

As you can see, everyone is so passionate about the World Cup in Qatar. You can showcase your passion sitting at home just by indulging in fun and exciting fantasy sports contests on FANSPEL, which is the leading cryptocurrency fantasy app that allows you to play and earn cryptocurrency prizes through fantasy football.

I guess we all have to agree that whenever there is an incentive involved, our passion automatically increases. Therefore, this is the best alternative for fans sitting at home that want to be a part of every game in the World Cup and win prizes.

The International Dhow Festival, which will take place in conjunction with the Qatar 2022 FIFA World Cup, will feature a 27-foot-long all-wooden and coir yacht that is being built to order at Beypore, historically known for producing Urus.

The Qatar 2022 FIFA World Cup will begin on November 20 and conclude on December 18, to coincide with Qatar’s National Day, at the 80,000-seater iconic Lusail Stadium, which embodies the country’s ambition and passion for sharing Arab culture with the rest of the world.

Overall this will be extremely exciting for football fans from around the world as they will be witnessing the world cup live in a different avatar this time as a new host is ready to take over the world of football.

Increased Fan Engagement in the Sports Industry Thanks to Cryptocurrency