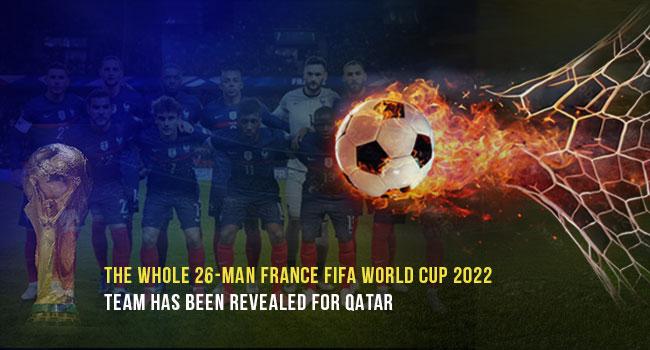 The whole 26-man France FIFA World Cup 2022 team has been revealed for Qatar.

The selection for the Nations League games in September provides a signal as to who may be included in the France World Cup 2022 team.

Paul Pogba and N’Golo Kante are not on France’s FIFA 2022 World Cup roster, which has been released.

However, the France team that won the World Cup in Russia was paradoxical. They were accused of being very defensive, however, they established a record with 11 goals in the elimination round, including four in the championship game. The detractors bemoaned Benjamin Pavard’s too-cautious play, yet here he is sprinting up from right back to score FIFA’s Goal of the Tournament in a pointless 4-3 victory over Argentina.

It is incorrect to say that the 2018 edition of Les Bleus lacked a distinct identity; instead, its goal was to triumph. They were a chameleon-like team that changed their tactics according to the game in order to go through the rounds. They were modeled after their manager, Didier Deschamps, a multiple champions.

Since that wonderful day in Moscow, France has experienced the disappointment of an early exit from Euro 2020, losing to Switzerland on penalties in the last 16, but they have also served as a reminder of just how good they can be when they are at their best, winning the Nations League Finals last October.

With goals from Kylian Mbappe and the venerable Karim Benzema, who was lured back from the international wilderness, they overcame Spain in the Milan championship after falling behind Belgium 2-0 at halftime in the semi-final before coming back to win 3-2. Before the big deal in Qatar, Victory honed its competitive edge.

Many of this team’s main players from 2018 are still active contributors. Given their heritage, that makes sense, but there is also cause for concern since a few of those regular starters—Raphael Varane, Oliver Giroud, and Antoine Griezmann, to mention just three—are no longer performing at the high caliber necessary to win back-to-back World Cups. For instance, Griezmann is now almost solely deployed by Atletico Madrid as a super sub. In the meantime, France’s championship defense in the Nations League quickly devolved into a relegation fight after losses to Croatia and Denmark both at home and away.

A bright new group, led by William Saliba and Aurelien Tchouameni, has recently emerged in opposition to these misgivings. Once the game begins, these players may push their way into Deschamps’ starting XI. The task of the former water carrier is to strike the correct balance while ensuring success.

Qatar 2022 could, in some ways, be the handoff point for France. Whoever plays on their team, will still be among the favorites.

Who will lead France at the FIFA 2022 World Cup?

Didier Deschamps is perfectly suited to a tournament’s rapid-fire difficulties since he is an arch-pragmatist and an excellent man-manager. His maturity, flexibility, and experience will be crucial. He is one of just three people to have won the World Cup both as a player and a manager, and even after ten years in command, he still has a burning desire for further accolades.

Who will represent France at the 2022 World Cup?

Kylian Mbappe scored four goals in Russia in 2018 to make history as the youngest player to score in a World Cup final since Pele did so 60 years ago. At age 23, the PSG star is an even better finisher and all-around player, and he is motivated by a desire to atone for his missed penalty in France’s shocking Euro 2020 loss to Switzerland.

How many athletes can France bring to the 2022 World Cup?

As a special measure brought in owing to the COVID-19 epidemic, national managers were permitted to send 26 players to the 2017 European Championship for the first time at a major event.