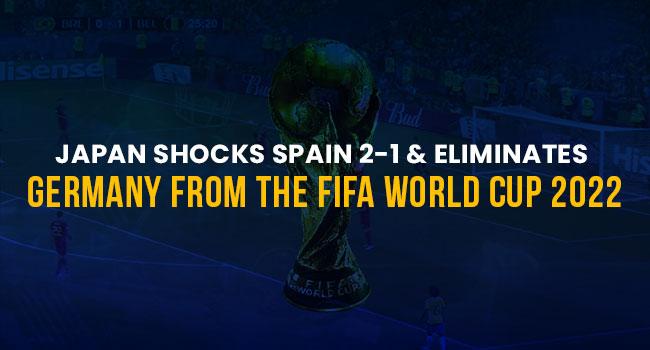 Japan will play Croatia in the Round of 16 while Spain plays Morocco. Asian heavyweights orchestrate a second-half comeback to startle the European giants. Germany is eliminated from the World Cup group stage for the second consecutive time.

Germany was once shocked by Japan at the FIFA World Cup 2022.

On Friday, they did it once more, upsetting Spain in the process. Additionally, they performed it at the Khalifa International Stadium, the same location.

In one of the most dramatic games in World Cup history, the Asian powers defeated the 2010 winners Spain 2-1 and eliminated the 2014 champions Germany, who were eliminated from the tournament for the second time in a row in the group stage.

As the fortunes of all four teams in Group E fluctuated, Japan led the group with six points, followed by Spain, who finished tied with Germany (4) in points but advanced ahead of their European counterparts due to a better goal differential. Costa Rica had a brief window of opportunity to advance after leading Germany but fell 4-2 and came in last place.

The night, though, belonged to Japan, who once again orchestrated a major upset with the help of brilliant second-half replacements.

In the previous two games, Japan coach Hajime Moriyasu’s team decisions have drawn much criticism. The men that turned the game around against Germany were left on the bench against Costa Rica, which led to a defeat after his substitutes did miracles in the second half. And on Thursday, when he didn’t include them in the starting 11, Japan was on the verge of elimination as Spain, who had controlled the first half, went ahead 1-0 thanks to a goal from Alvaro Morata’s header in the 11th minute.

Maybe he did. But he changed his tune, and Japan recovered to win the game and go to the Round of 16.

Ritsu Doan, one of the key players in Germany’s victory, was introduced by Moriyasu off the bench to open the second half. And it proved to be a pivotal decision since Doan scored only a minute after going on to completely alter the course of not only the game but also the dynamics of Group E.

It had been easy sailing for Spain and Germany up until that point. At the Al Bayt stadium, Germany was asserting itself over Costa Rica while Spain was never threatened by Japan.

Germany took the lead in the 10th minute thanks to a Serge Gnabry header from a David Raum cross, and they appeared to be headed for the round of 16 given that Japan, who had been ahead of them on points before the game, was at the time losing to Spain.

In both games, it persisted until halftime. However, everything changed after the restart.

After Doan’s goal to tie the score in the 48th minute, Japan came out swinging and Tanaka controversially beat Spain goalkeeper Unai Simon. Before the ball was passed over for Ao Tanaka to score, it appeared as though it had already crossed the byline. But after a torturous VAR wait, the decision went in Japan’s favor.

Spain made a strong effort to score an equalizer, but despite maintaining possession, they were unable to get past the Japanese defense.

Japan overcame tense times late in the game to secure a renowned victory. It made little difference that Germany had won the other game over Costa Rica. A week after shocking Germany, they handed them an even larger blow by eliminating them from the FIFA World Cup.