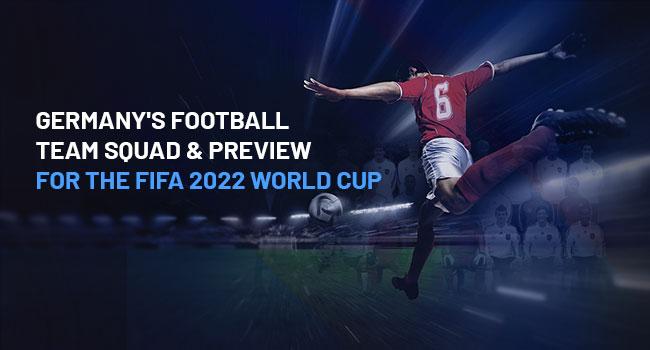 The Germany World Cup 2022 roster has been released, and Hansi Flick’s team is attempting to reclaim their place on the international scene.

Despite the fact that the latter Jogi Löw years haven’t entirely been forgotten, the Germany World Cup 2022 team demonstrates that they are once again a legitimate competitor.

This is not peaking Germany—a loss to Hungary in the Nations League made that clear—but it is a more competitive team than was on display at Euro 2020. The team seems more balanced under 57-year-old Hansi Flick, and the renowned ruthlessness has returned. The team’s improvement may have been most seen following a subdued 2-0 victory against Liechtenstein in Flick’s first game in charge: Germany prevailed at home.

In terms of people, Jonas Hofmann is the major development. At the ripe old age of 30, the Borussia Monchengladbach winger has established himself as a key player and has shown unexpected versatility, even as a goal-scoring right wing-back.

However, after avoiding losses to the Netherlands and England, Germany’s confidence stayed intact, allowing them to later humiliate European champions Italy 5-2 in late June. In 2022, a remarkable run of four straight 1-1 draws put a stop to the buzz.

Given the wealth of German midfielders, Toni Kroos’ international retirement after Euro 2020 was neither shocking nor troubling, but it served as a reminder that the nation’s generational change is still occurring. The 36-year-old captain Manuel Neuer (above) will be playing in his final World Cup, and the same may be said for Thomas Muller, Ilkay Gundogan, and — if healthy, given his ankle ailment — Marco Reus. There isn’t much time left to appreciate this squad, however, all four are probably going to stay for the 2024 European Championship in Germany.

Although there were smiles when they eventually inaugurated its new central campus in Frankfurt (their version of St George’s Park), the German FA continues to suffer rather than enjoy. However, they will face tough questions about what they intend to do to address human rights concerns in Qatar, as would every FA and team at this tournament, and if their words will be backed up by deeds. It has been up to the players to speak up thus far.

Otherwise, this competition is almost a free throw. The previous one was so terrible, and Flick & Co. are in an excellent position right now with a home European Championship in two years. Germany may take a stride forward by making it to the latter rounds if performances are strong, as all indications are they will be.

Who is the World Cup manager for Germany?

During his illustrious tenure as Bayern Munich manager, Hansi Flick trained this team’s spine and was a significant member of the coaching staff during Germany’s 2014 World Cup victory. He is tactically adaptable, smart as a whip, and knowledgeable about his squad and what it takes to succeed at this level. This is a terrifying mix, especially for a team as reliable as Germany.

Who is the best player for Germany?

This competition could be Jamal Musiala’s. For Bayern Munich, the 19-year-old has been outstanding, providing game-changing quickness and talent. The Stuttgart-born forward, who played for Southampton and Chelsea from the age of seven and was an England youth international, is now a must-pick and is guaranteed to impress.

How many athletes will represent Germany in the 2022 World Cup?

As a special measure brought in owing to the COVID-19 epidemic, national managers were permitted to send 26 players to the 2017 European Championship for the first time at a major event.