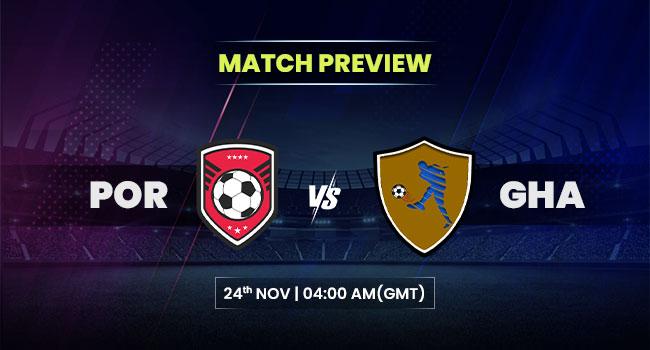 Portugal’s opening match in Group H will be against Ghana, the lowest-ranked team in the competition. One of the most anticipated European teams to triumph in Qatar, Portugal, will enter the game amidst a conflict between Cristiano Ronaldo and Manchester United, who have urged CR7 not to return to training once his world cup campaign is complete. Otto Addo’s crew has seen several changes recently, so they could have something unique to offer.

The 61st-ranked squad in the most current FIFA global rankings is projected to be an easy match for the 2016 European Champions since Fernando Santos has an immensely skilled roster at his disposal. A well-known footballing nation is Portugal. They have only made it to the World Cup semifinals, though, twice, in 1966 and 2006. In four of their previous five competitions, they suffered round-of-16 defeats. Ronaldo, who may be competing in his final World Cup, would dearly prefer to alter it this time.

Ghana enters the world cup in uneven form, despite their confidence-boosting friendly victory against Switzerland in Abu Dhabi last week. Ghana must put on their best shooting shoes if they want to get past a defense that has only conceded two goals in their last seven games.

The only previous meeting between Ghana and Portugal occurred at the FIFA World Cup 2014 group stage. Ghana won the match 1-2 as Asamoah Gyan’s equalizer 10 minutes from the finish reversed John Boye’s own goal on the half-hour.

There are no injuries on either team’s mind. Ghana’s offense will be led by seasoned winger Andre Ayew, while Mohammed Kudus’ performance in the game is anticipated. Cristiano Ronaldo, who is anticipated to be Portugal’s brightest figure in the game, won’t intimidate the seasoned midfielder. Rafael Leao, an AC Milan attacker, will be an exciting new prospect to watch at the same time.

Prediction of POR Vs GHA Match

The FIFA World Cup 2022 has proven challenging for bigger teams, as seen by the losses of Argentina and Germany in their opening matches against underdogs Saudi Arabia and Japan, respectively. Portugal will play it safe and aim for a 2-0 victory.

This world cup has been quite interesting until now and due to the recent upsets there is no guarantee who is strong and who is weak, Qatar has until now given the biggest upset of this World Cup by defeating Argentina in the opening game. Qatar even though the hosts have no world cup experience and this win against Argentina boosted their morale even their fans were ecstatic after the win, let’s see who comes out on top in this fixture taking place between Portugal and Ghana.