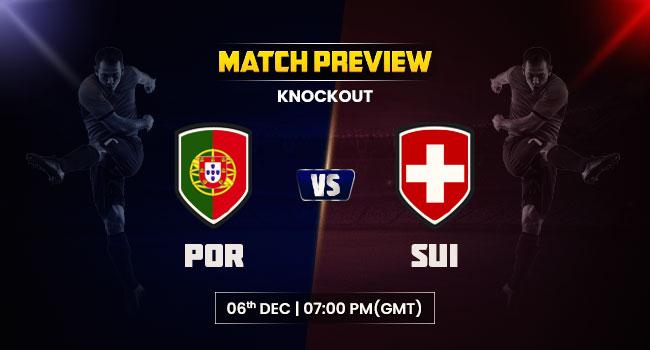 Prediction, team news, and lineups for POR Vs SUI.

In one of just two all-European matches in a diversified last 16, two teams with very different fortunes in their final group matches compete for a vital berth in the quarter-finals.

After a strong start to their Qatar 2022 campaign, Portugal needed only a point in the last round of group matches to be certain of placing first, and qualification for the knockout rounds was already certain.

It appeared that the Selecao would breeze through when Ricardo Horta, one of several new players selected for the occasion by coach Fernando Santos, gave them the lead against South Korea in the fifth minute. However, their opponents pulled off one of the several comebacks that have defined the opening week of the finals, tying the score before halftime and then scoring a stunning goal in the 91st to defeat them 2-1.

Portugal, although suffering their first defeat, advanced as the group’s top team thanks to Uruguay’s victory against Ghana, and they are now trying to go to the round of 16 for the first time since 2006 when they finally placed fourth in Germany.

After seeing his team defeat Ghana 3-2 to open the World Cup and then add a 2-0 victory against Uruguay on Monday with two goals from Bruno Fernandes, Euro 2016 champion Santos might perhaps aspire to break a new record this winter.

Despite their success at the junior level and third-place finish at the 1966 FIFA World Cup, the Iberian country of Portugal has never advanced to a senior international final. In fact, two of their past three seasons came to an end in the opening round.

Santos must pick his side wisely in Lusail since the Selecao will be against familiar opponents with a successful track record in big championships, and there is ongoing uncertainty over the health and condition of one-man record-breaker Cristiano Ronaldo.

When Portugal and Switzerland last faced off in the UEFA Nations League earlier this year, the results were drastically different and happened within a few days of each other. Portugal won easily, 4-0, in Lisbon, with Cristiano Ronaldo scoring twice in the first half, while Switzerland won 1-0 in Geneva.

Following their victory against Spain in the Nations League over the summer, Switzerland went on to defeat the Czech Republic and Spain in the same league before beginning their incredible journey to their first FIFA World Cup by winning two of their opening three games in Qatar.

In order to advance to the round of 16, Serbia had to be defeated in a tense 3-2 win in front of their home crowd at Stadium 974, when 11 players were given bookings by the referee.

They won thanks to goals from Breel Embolo, Remo Freuler, and first-goal scorer Xherdan Shaqiri, who celebrated by silencing the Serbian crowd who booed him at every touch. Granit Xhaka just avoided getting sent off at the conclusion of a stormy match.

The Swiss have never before won three games at a single World Cup finals and have missed the quarterfinals in seven of their previous efforts, but this year, Murat Yakin’s team is now just 90 minutes away from accomplishing such a record.

Switzerland hasn’t advanced past the round of eight since they hosted the World Cup in 1954, but after defeating France, the defending champions and neighbors, to reach the quarterfinals of last year’s Euros, a team experienced in the ups and downs of the knockout stage, will undoubtedly fancy their chances on Tuesday.

How far can Portugal go in the FIFA World Cup 2022?

The previous time Portugal played, Fernando Santos took advantage of the opportunity to make six changes to his starting lineup, but the renownedly cautious coach is expected to stick to his guns on Tuesday night.

Antonio Silva, a 19-year-old defender for Benfica, made his first competitive appearance against South Korea in August alongside Pepe, an experienced player 20 years his senior. However, once Ruben Dias returns to the back four, the youngest Portuguese player to appear in a World Cup match may be moved aside; Diogo Dalot made a strong impression in his maiden World Cup start and may be kept.

Cristiano Ronaldo, the Selecao’s all-time leading scorer, starts up front once more after being one of three players substituted after 65 minutes on Friday. Andre Silva and another Benfica youngster, Goncalo Ramos, are relegated to the bench.

Due to an injury, Nuno Mendes was forced to withdraw from the rest of the competition last week. Danilo is still out with rib fractures, while Otavio is still questionable.

After missing their last Group G encounter due to sickness, Switzerland will be hopeful sturdy goalkeeper Yann Sommer can return to strengthen their back line at Lusail Stadium. If Sommer were still available, he would replace Gregor Kobel of Borussia Dortmund because of his 76 caps for the Nati, which included 30 clean sheets and several clutch saves.

Murat Yakin’s team has a good chance of remaining mostly unchanged because of Granit Xhaka, Remo Freuler, a disciplined defense, Breel Embolo, and the midfield screen they give.

Christian Fassnacht and Renato Steffen are both possibilities on either wing, although Ruben Vargas and Xherdan Shaqiri offer backup from wide.

Portugal seldom struggles to score goals with their wealth of offensive quality, but maintaining a lead is frequently a different story.

The Selecao frequently retreated as a result of Fernando Santos’ continuous negativity, which would give a strong Swiss team the chance to assert themselves and buy more time. However, Pepe, Ronaldo, and the company should just edge out the competition because of their superior big-game skills.