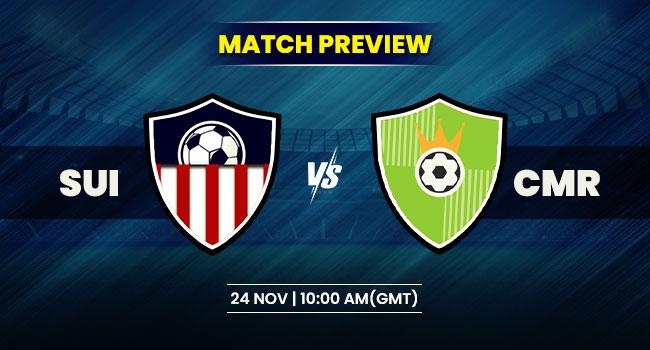 On November 24, the FIFA World Cup 2022 match between SUI vs CMR will take place.

Switzerland will try to get off to a good start in their FIFA World Cup 2022 campaign against Cameroon on Thursday at the Al Janoub Stadium.

The match between Switzerland and Cameroon may determine whether or not both teams advance to the knockout rounds. One of these two or Serbia will have to settle for second place in Group G because Brazil is expected to win it.

With victories over teams like Portugal, the Czech Republic, and Spain in the most recent Nations League campaign, Switzerland has picked up momentum at the ideal time. However, they came in third place in their group and were unable to advance to the next round.

Following an uninspired 2-0 defeat to Ghana in a tournament warm-up game, Switzerland has been dealt a harsh wake-up call. However, that may only be advantageous if they are able to recover effectively in the most crucial games. After finishing in the Last 16 in Brazil and Russia and going undefeated in the group stage of the 2018 tournament, they are hoping to go to the knockout stages for the third consecutive year.

They have an excellent chance of moving on to the Round of 16 thanks to Premier League talents like Granit Xhaka, Fabian Schar, Denis Zakaria, and Manuel Akanji being in their ranks, and a victory over Cameroon would be a wonderful place to start. The potential for the men of Murat Yakin to disrupt their opponents.

After failing to qualify for the 2018 World Cup, Cameroon is now playing in the World Cup for the eighth time in their history. The Indomitable Lions performed admirably in their World Cup qualifying matches, defeating Ivory Coast 1-0 to take first place in their division.

Karl Toko Ekambi’s goal in stoppage time of a playoff match against Algeria helped them overcome a 1-0 first-leg deficit and go to the World Cup on away goals. However, Cameroon dropped to the bottom of their group in both 2010 and 2014 after losing each of their past six World Cup games.

They did win the third-place play-off to claim third place at the 2021 Africa Cup of Nations. Although they are underdogs to advance, Cameroon would be well-positioned with a victory over Switzerland for their match against Serbia on November 28.

The Switzerland team is well-balanced on all fronts, has talent and experience in all areas of the field, and includes several veterans.

With what might be considered a golden generation at his disposal, head coach Murat Yakin will try to advance his team as far as he can in the competition. Yakin attempted a novel 3-1-4-2 system against Ghana but was unsatisfied with it the prior time around and may have switched to a 4-2-3-1.

Granit Xhaka, the captain, will be essential to Switzerland’s chances in Qatar. The fiercely competitive center midfielder, who has played more than 100 times for his country, has been outstanding for Arsenal this season in a hybrid box-to-box role, contributing to six goals in just 13 league games. He will be joined by Remo Freuler, the metronome, whose sole responsibility is to keep the action moving forward.

For Manchester City and Newcastle United, respectively, Premier League center-backs Manuel Akanji and Fabian Schar are playing the best domestic football of their lives. Both are well known for their match savvy, defensive prowess, and ball-handling skills.

The same can be said about fullbacks Silvan Widmar and Ricardo Rodriguez, both of whom enjoy pushing high up and sending crosses into the box, but the former no longer has the legs to handle wingers with quick feet.

Yann Sommer, the goalie for Borussia Monchengladbach, had an ankle injury at the beginning of October, but he should be able to play today. Having already shone at the 2018 World Cup and the Euro, he will be crucial in front of the goalposts.

Even though Xherdan Shaqiri is now playing in the MLS, defenders still find him difficult to handle because of his devastating crosses into the box. Forward Noah Okafor of Red Bull Salzburg will try to make his debut on the greatest platform following his performance in the champions league.

Also a very adaptable midfielder, Djibril Sow will probably trade spots with Xhaka when the latter moves forward. Breel Embolo has had a great start to the season with Monaco and will be hoping to continue that success while representing his country.

Following their third-place result at the Africa Cup of Nations, Song was promoted from managing the Under-23s to the first squad in March, while Cameroon recently changed coaches. Song has been in charge of five games, including the thrilling playoff victory against Algeria, and has experimented with a number of various formations in the World Cup warm-up games, including the 4-3-3, 4-1-4-1, and 4-4-2.

The 4-4-2 formation works well for them given the talented striking they have available. One player who has been riding a scorching scoring streak for Bayern Munich this season is Eric Maxim Choupo-Moting. He would try to bring the aspirations of his country to Qatar as the leading man of Cameroon.

Meanwhile, Vincent Aboubakar, the attacking partner of Choupo-Moting, will try to win his first World Cup. The Al-Nassr player will be in charge of the front line here after scoring eight goals at the AFCON in 2021.

Andre-Frank Zambo Anguissa, the standout midfielder for Napoli, had a knock going into the competition but has recovered in time for the friendly. This is wonderful news for the Indomitable Lions since he has the ability to run the show and be active everywhere on the field. Martin Hongla of Hellas Verona, a destroyer, will double-pivot with the former Fulham player while providing defensive protection.

Andre Onana, the starting goalkeeper for Inter Milan, is essential in the buildup as Cameroon enjoys playing out from the back and imposing a complex brand of football on the opposition. With this collection of top teams, that won’t be the case. A slender and condensed back four made up of Nouhou Tolo, Jean-Charles Castelletto, Nicolas Nkoulou, and Collins Fai will be used.

This is the first time Switzerland and Cameroon have ever met. Since defeating Togo 2-0 in the group stages of the 2006 tournament, the Swiss have only faced an African team twice at the FIFA World Cup.

With only six victories in 15 prior matches against opponents from that continent, Switzerland has a dismal record against them (D3 L6).

Join the FIFA World Cup action and get ready to win exciting prizes in cryptocurrency by playing daily fantasy sports contests on the leading fantasy sports platform Fanspel, it enables you to earn passively while watching your favorite teams battle it out.